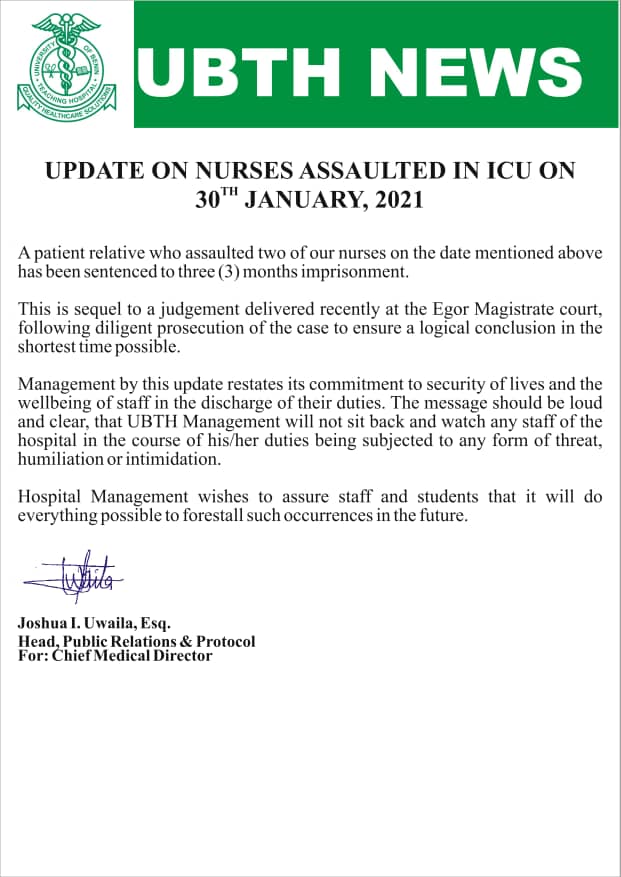 The Chief Medical Director of University of Benin Teaching Hospital, Prof. D.E. Obaseki has reiterated his call for members of the public to stop any form of assault against health workers in the course of performing their duties.

The CMD made this call against the background of the recent judgement of the Egor Magistrate Court II, Evbuoriaria presided over by His Worship, J. Ogbeide.

In the judgement delivered on 18th November, 2021 in the case C.O.P. vs Ikechukwu Sunday & Anor, the accused were found guilty on a two count charge of assault and malicious damage to property. They were sentenced to 3 months imprisonment on both counts with an option of fine.

Mr Ikechukwu Sunday together with his brother Lucas both children of a deceased patient of the hospital resorted to assaulting some medical personnel who were on duty at the Intensive Care Unit (ICU) of the hospital and also destroyed some properties upon the death of their father.

The CMD thanked the Deputy Governor of the State Rt. Hon Philip Shaibu who was on ground to broker peace when the health workers threatened to go on strike in the face of incessant attacks by patient relatives. He also appreciated the Commissioner of Police Mr. Philip Ogbadu for his swift response on the day the assault occurred and for diligent prosecution of the case.

The Management of UBTH has promised to do all within its powers to protect staff and students in the performance of their lawful duties and would not tolerate any assault against its workforce.

The CMD further assured members of the public that the hospital will not rest on its oars in its avowed commitment to provide quality healthcare services to its teeming clients.

In the same vein, Management of UBTH has also encouraged members of staff to continue to render top notch services to patients and clients of the hospital. Stating that it would not shield any erring staff who is found wanting in the event of the establishment of a case of misconduct or serious misconduct against him/her.

Three staff of the hospital recently got their appointment terminated after due consideration by the Board of Management for various offences While 2 others are at various stages of disciplinary investigation to determine their culpability or otherwise with regards to certain allegations bordering on financial impropriety.

Management assures everyone that the Public Service Rules would be adhered to strictly and every matter will be decided on its merit.