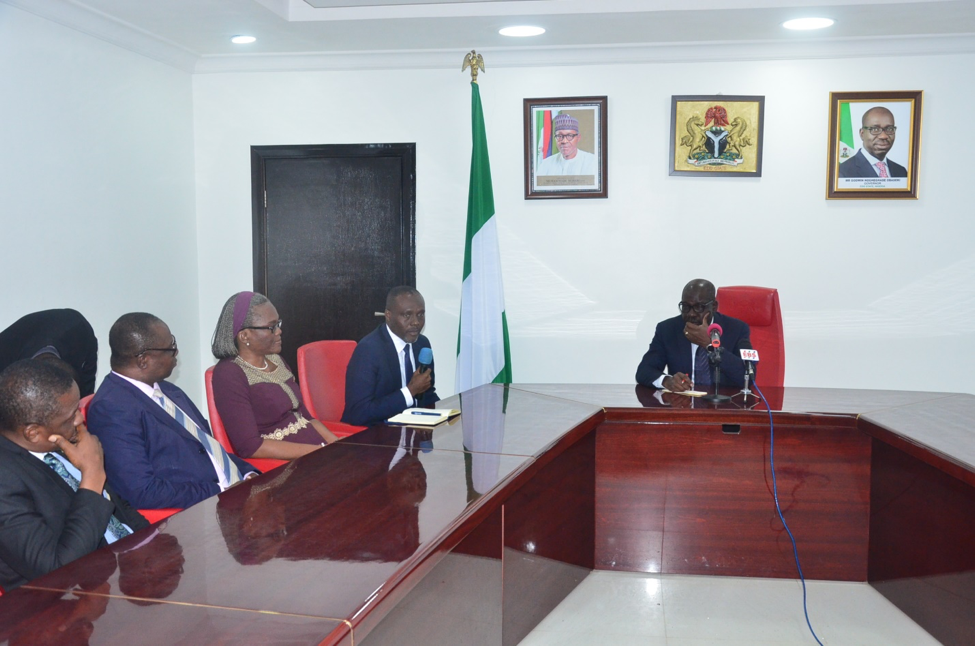 The Management team of the University of Benin Teaching Hospital, led by Prof. Darlington Ewaen Obaseki have paid a courtesy visit on the Edo State Governor, Mr. Godwin Obaseki in his office.

Speaking during the visit at Government House, the Chief Medical Doctor, Prof. D. E. Obaseki said the purpose of the visit was to intimate the Governor of the new UBTH Management team led by himself and to thank his Excellency for his support to the hospital. The CMD reiterated the need for the Federal and State hospitals to work together because he believes that there are opportunities for such collaboration.

Prof. Obaseki used the opportunity to solicit for the Governor’s support to offset bills of indigent patients. He also appealed to his Excellency to intervene in the call for exemption of certain allowances of doctors in UBTH from being taxed.

In his response, the Executive Governor of Edo State, Mr. Godwin Obaseki said he was happy to receive the CMD and his Management team and congratulated, Prof. Obaseki on his appointment as Chief Medical Director

Speaking further, the Governor emphasized the importance of synergy between the various tiers of Government particularly those in the health sector stressing that there must be a synchronization of efforts and resources. He noted that Medical insurance could be considered as part of government’s effort in mapping out a health care strategy in the State saying that the UBTH could be brought into the picture. Part of this initiative, he said, may include the exchange of personnel between the State Hospitals and the UBTH. Other areas possible collaboration according to the Governor includes enhanced training for Nurses and middle-level health care personnel and medical insurance which he noted, would assist in terms of tackling the challenge of the indigence of patients.

The Governor then appreciated Management for coming and assured them of his full support and co-operation as far as health is concerned in Edo State.