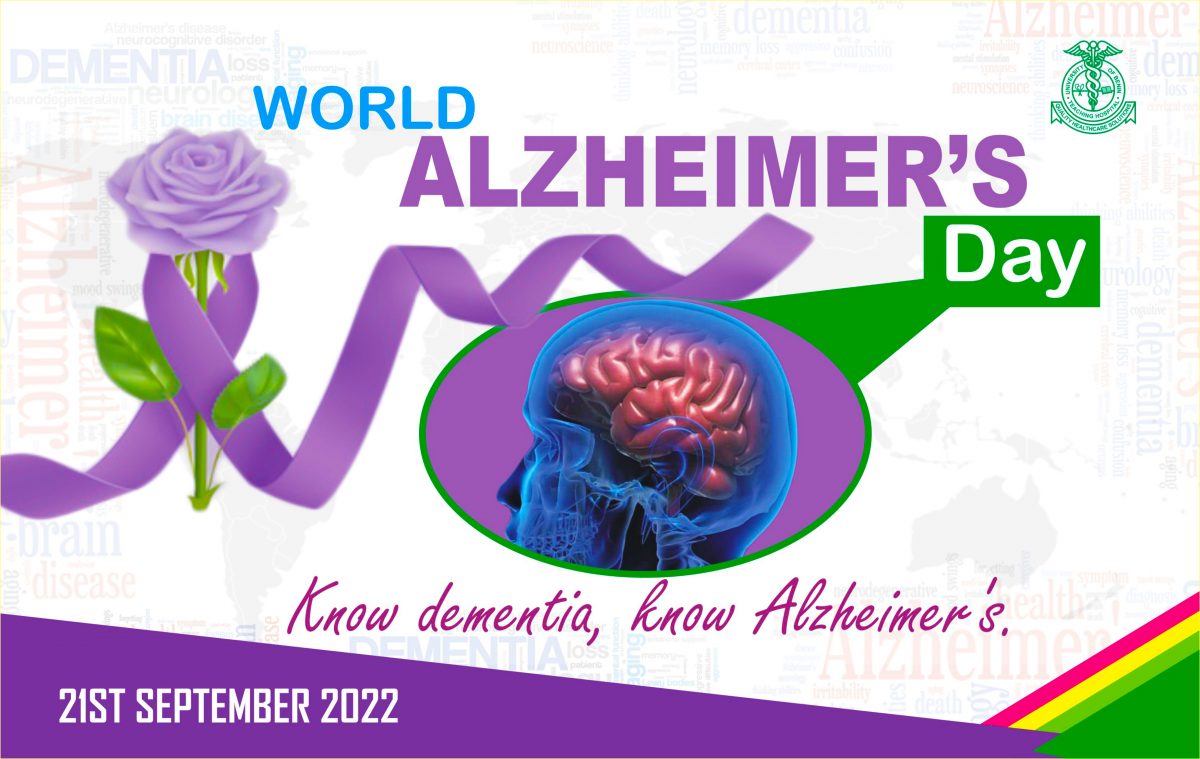 To commemorate the World Alzheimer’s Day, The Content team of the University of Benin Teaching Hospital discusses with Dr. Israel Aina, the Consultant Psychiatrist and Ag Head of Department of Mental Health, UBTH/ UNIBEN, on the topic of Alzheimer, post-dementia care for patients and expected activities of care givers. We also featured the activities of the Hospital in caring for its patients.

Can you tell us a bit about Alzheimer’s disease? What is the disease about and who are those affected?

The Alzheimer’s disease is a Neurodegenerative disorder of the brain. It is a condition where the brain cells begin to break down. It is part of the aging process of the brain cells amongst older persons. It is common amongst people who are within the ages of 65 years and above.

With the majority of cases recorded amongst older persons, has there been recorded cases of younger persons lesser than the ages mentioned that have been diagnosed with Alzheimer’s and how often?

Yes, there have been cases of younger persons with Alzheimer diseases but they are rare cases. In the cases of mental health amongst younger people, usually the first line of thought would  not be Alzheimer’s as there are other conditions that might reveal alike symptoms.

What other conditions can be likened to Alzheimer’s? What other mental conditions that have been recorded even amongst younger people?

Medically, how is Alzheimer’s disease Diagnosed?

Alzhemiers disease is one of those conditions where the individual affected might not be aware of it as at its inception. The symptoms are usually observed by people who maintain close contact with them. Often times, the condition might be not be recognized at its inception, but over time, they would get to observe changes in the person. That is, the person might not be able to function as they usually do even as the condition progresses. Hence, the first recognizable symptom is Memory impairments – forgetfulness. The persons affected might not know this or be able to identify it when it begins, but memory impairments is usually the first symptoms recognized.

Another symptom is the person exhibiting Tremors which could happen even when the person is relaxed. Usually, the tremors begin with Shaky hands. The Tremors could affect every other part of the body, but commonly, Tremors of the hands.

By the time the Tremors begin to affect the whole body, it begins to affect the person’s ability to walk. That is, Walking would seem like a very active chore.

As time progresses, absolute difficulty in walking is observed. On first contact with individuals in that stage, you would observe slow speed in movement. Also, you would get to see their movement stooped and bent with their head and other body part bent forward when walking.

This particular mode of walking would seems like shuffling of cards and is called, shuffling gait.

As a result of the neurons degeneration and ability not to move as they should, they tend to feel rigid. That is, when their hands are bent or other parts of their body that ought to be free motion, they appear rigid and causes discomfort.

When the person has Tremors, rigidity in the body and is generally slow, you would observe that their everyday activities becomes generally slow and a difficult task for the individual. These are first contact symptoms on Alzheimer’s disease.

Do they tend to suffer pains as part of the symptoms of Alzheimer?

As mentioned, Pain is not necessarily a symptom of Alzheimer’s. Pain may occur when therapy is done on a rigid joint. Asides this, there might be some underlying causes for the pain which can be as a result of other health conditions, not necessarily Alzheimer.

Cell degeneration is basically a change that occurs in the neurons. The neurons are the units of cells that makes up the brain in the nervous system. Just like you have cells in the skin, the unit of function of the brain is what you call the Neurons. There are some changes that occurs in the neurons that causes the disease. For example, the most common is the neuro-transmitter in the brain, Dopamine and acydicolin, not relating as they should. These neurotransmitters conducts impulses of neurons to another. So, when this transmitters becomes low in the brain, people develop Alzheimer’s.

We earlier stated that persons in this condition usually operate slowly. Hence, one simple way we can explain this situation is that the section for impulse from one brain cell to the other is impaired. If there are impairments in sending information from one neuron to another, it means that the communication process would be slow. In those cases, medications used in managing those cases are to make this neuro-transmitters more available.

Other things that could actually cause this is the aging process in the brain. In trying to discuss the aging process, we would make mention of some things called the free radicals. The free radicals are like chemicals that are injurious to the dead cells. These are the cellular changes that leads to what is obvious in an individual and called Alzheimer’s Disease.

Can you prevent Alzheimer’s and can it be cured?

Strictly speaking, it cannot be said that Alzheimer’s is preventive but theoretically, it is believed that if an individual has a very active lifestyle, that is, the individual actively utilizes and engages the brain intellectually, takes proper care of himself, eats well, and generally maintains an healthy lifestyle, the chances of developing Alzheimer’s becomes slim.

Hence, it can be said that an active lifestyle while young can prevent Alzheimers disease. This is one of the reasons Alzheimer’s disease is hardly found amongst the intellectuals as they actively engage their brains to achieve tasks. Even when they begin to forget things, it might not be observed as a result of the level of their intellectual engagements.

In terms of cure, medically we would say that Alzheimer’s disease is not curable but can be managed by taking medications that improves better functioning of the brain. We basically discuss management and not cure in cases of Alzheimer’s disease as it has no cure and Is a terminal disease.

How can Alzheimers disease be managed?

Managing Alzheimer is a multi-disciplinary kind of approach. There is the need for the Neurologists, the psychiatrist, the occupational therapist, the physiotherapist and the nurses or caregivers to help the person. Every discipline mentioned would function at the various stages of of the person.

At the initial time, the person can still manage to go about his daily activities. As  time progresses, He or she would not be able to carry out their everyday activities and as such would need help. Most times the hallmark of treatment is TENDER LOVING CARE, that is, making sure you help the patient with what they would need or have done daily. That is you tend to assist the person when he or she finds it difficult to help himself to eat, to bathe, to dress up and all other activities the person could previously get to do. Help would be needed as the illness progresses but at the initial time, he or she can still manage. So, for the other professionals, of course, the Neurologists or psychiatrist would administer the drugs necessary to reduce the rate of progression of the condition and then the drugs already mentioned and the drugs that take care of the free radicals like Vitamins. Occasionally they might have other symptoms to aid them. Asides this symptoms, Occupational therapist would assist them in activities that they cannot get to do themselves. The physiotherapist help them with therapy to improve mobility.

Patients homes would have to be restructured to accommodate and help them navigate effectively in and round the house.

As Alzheimer’s is basically memory impairments, you would have to put measures in place to aid their memory improvement. Their tasks would have to be simplified as they may not be able to carry out complex processes they could easily carry out before the disease. For example, Their environment and gadgets would now have to be modified in a way they would not need assistance. There would come a time that they would become totally bedridden and would need nursing care, then, you would have to take total charge of their care.

Alzheimer’s Disease is a disease condition that is terminal. Once it begins, it is a matter of time before the person succumbs to it fully. It is a terminal condition that requires lot of nursing care.

The theme of the Alzheimer’s day is “Know Dementia, Know Alzheimer’s”, what is your take on this?

“Know Dementia, Know Alzheimers” is simply this; The commonest cause of Dementia is Alzheimer’s Disease. Dementia itself is a condition, a syndrome. There are so many other thing that causes dementia but Alzheimer is the commonest of them. So, if you know Dementia, you would definitely know that a patient with the condition of dementia would have suffered Alzheimer’s.

When the diagnosis is made, the suggested line of action is to slow the process of degeneration.

Are there special trainings or knowledge for the non-medical associated caregivers who care for patients with Alzheimer’s?

Are there online resources that can be previewed to gain additional knowledge on Alzheimer’s disease?

Well, in the world we live in, everything is on the internet. If you google on Dementia and Alzheimer support groups, you would see a lot of platforms where you could get connected to and pick up some information that is peculiar to the condition of the affected person.

In conclusion, what are your highlights on Mental health, Dementia and Alzheimer?

Mental health is a vast area of discipline. As Dementia is a condition, there are other mental conditions. The most important is that everyone should try and maintain a good mental health by doing everything possible to stay healthy. Activities like eating healthy, reducing to the barest minimum activities that increases stress, taking out time to rest and when you observe anything you are not comfortable with, don’t fail to discuss it as early as possible. Finally, Trust God. Thank you.